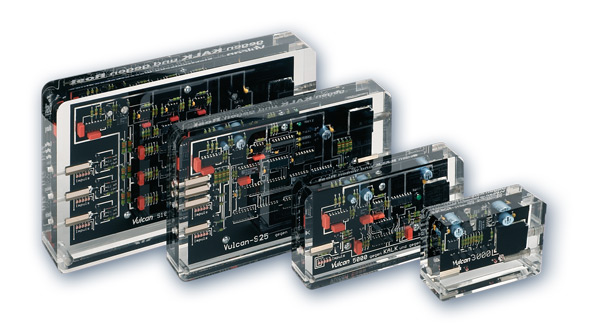 Vulcan Is Not Magnetic
Why to avoid magnetism when treating water
All magnetic-based, physical water treatment devices produce electric impulses by induction. This means that the magnetism, together with the water flowing through the pipe, generates complex electric impulses. Sometimes, this gets achieved. However, the following problems cannot be ignored:
Problem with magnetism: velocity
The generation of a complex electric impulse field only works if the water inside the pipe flows by the magnetic field at exactly the right speed (velocity). It the speed is correct, then the impulse is generated. However, if the speed of the water is not right - too fast or too slow - the impulses are not generated, or worse, the impulses generated are wrong for effective treatment.
We believe that it is the best to always provide the perfect and stable electric impulse field simply by using constant electricity. Therefore, the Vulcans are solely electric.
Problem with magnetism: not all pipe materials can be treated equally well
As the magnet does not penetrate through metal very well, many distributors recommend to install their magetic units on plastic pipes. If the installation site is a metal pipe, their recommendation is to cut out a section of the metal pipe and replace it with plastic pipe.
This is a complication when working with magnetism, as it limits the treatment to taking place on plastic pipes only.
Problem with magnetism: magnetism itself
Magnetism is a powerful force indeed. It is attributed with many positive effects on organisms. However, everyone also knows that magnets attract metallic objects, no matter how small. This again leads to a major problem when magnets are used on a piping system because the area where electromagnetic cables or permanent-magnets are installed is, of course, magnetic. Here, all magnetic particles in the water are firmly stuck to the inside of the pipe. This happens with both metal and plastic pipes, alike. After only a short while, the inside of the pipe is covered with a metal-dirt-particle-film that is a perfect breeding ground for bacteria (biofilm) or other unwanted substances. Many producers of magnetic devices therefore suggest to turn off the unit and "flush" the pipes every six months as a solution to this build-up problem.
Building up a potentially dangerous biofilm with magnetism in order to treat the piping system is an undesirable way to solve the scale problem. Also, the need to clean the pipes with flushing or brushing can be avoided. The answer is not to use magnetism.
1